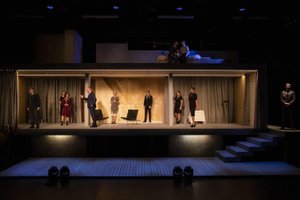 Love gets the last word

"Little Soldier" at Den Fynske Opera is a thought provoking, albeit not
fiercely enthralling contemporary drama.

.....Jens Krogsgaard meticulous instruction of each character is very clear, and the singers fully honor his fine dramatic demands and ideas....... 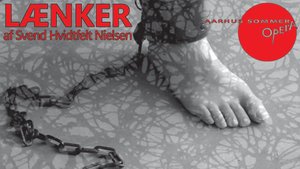 The tenor Jens Krogsgaard makes it with this show crystal clear that he can direct. More than just rudimentarily. Hopefully he will continue to direct in the future.

Tenor Jens Krogsgaard made his debut as a stage-director. A decisive plus was his detailed, calm, meaningful personal direction of all characters, which indicates that his debut as a stage director won’t be the last time we see him in this capacity. Krogsgaard is clearly engaged in the substance of this story and it shows.

The composer Svend Hvidtfelt Nielsen and stage-director Jens Krogsgaard have created the libretto together, based on Sanne Bjerg's novel "Papaya Passion" and has - jointly created an exciting and relevant opera/production. 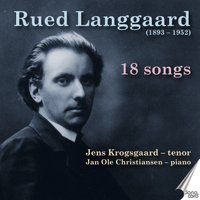 Tenor Jens Krogsgaard has been an exciting feature of the Danish opera / music scene, especially in Aarhus, where he made his debut as Tom Rakewell in Stravinsky's "the Rake’s Progress" at the Danish National Opera in 1996, while the audience in Copenhagen will remember him as Captain Vere in Benjamin Britten’s “Billy Budd”. Lately he has also had success as stage director at Aarhus Sommeropera.

The latest Cd from the at the moment of recording 53-year-old Jens Krogsgaard, is a splendid example that he both want to, and dares to present vocally demanding music, which is unknown most, but which we through him get the chance to experience and even to understand, that it deserves to be known to more.

Langgaard must have composed these song with a Wagnerian- Heldentenor in mind, and Jens Krogsgaard must sometimes go to the limits, and yes that can be heard, but it can also be overheard, because Krogsgaard has a sensitive beautiful Heldentenor-sound, which is ideal for these songs. His interpretation is vital and authentic, with an ideal German declamation. All in all, the Cd is a very interesting experience for the curious listener.

I felt that Jens Krogsgaard was sometimes just a touch harsh in some of these songs but overall, he gives a convincing recital. The pianist, Jan Ole Christiansen provides a beautifully stated performance of these varied and often complex accompaniments.

The liner notes include the texts of all the songs in German/Norwegian and English. There is a short note about Rued Langgaard and the usual details of the performers. I could have wished for a bit more detail about the songs, as there is very little written elsewhere.

This is an excellent introduction to Langgaard’s songs. Like much of this composer’s music the listener will be conscious of his eclectic style: the composer picked and chose whatever style best suited the moment. What is not in doubt is the sheer beauty and musical poetry of many of these settings. They will be of huge interest to all lovers Scandinavian songs in particular and ‘lieder’ in general. 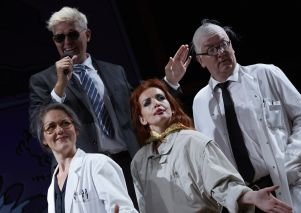 Jens Krogsgaard is really singing great as the Doctor and most welcome he is the only bid for a fairly normal man.

…with Jens Krogsgaard's impressive, powerful dramatic tenor as the Doctor

….and the successful casting includes the equally good Trine Bastrup Møllers complacent psychotherapist and tenor Jens Krogsgaard's lovable but hopeless Doctor. It is incredible that there is a danish opera singer, who resembles Per Pallesen (famous danish Comidian) that much!

Jens Krogsgaard impressively sings the mad and radical scientist, The Doctor, and his rigid caricature is quite right for the part. 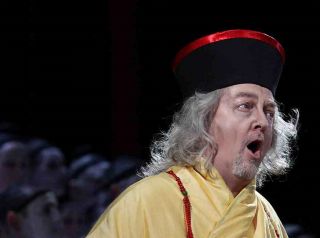 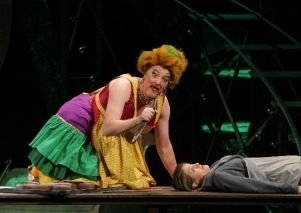 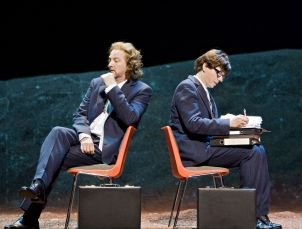 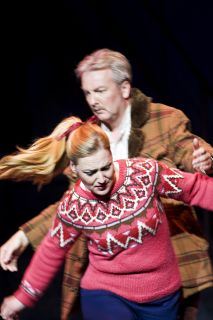 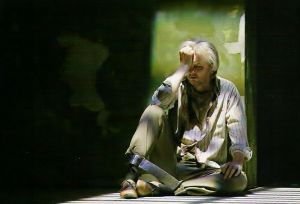 ....There was an open, frightningly pain in Jens Krogsgaards wisely used tenor......

.....While Ann Petersen and Jens Krogsgaard comes beautifully through due to their vocal stalwart security.

.....the tenor Jens krogsgaard takes his voice right to the limit in the demanding part of the captived and starved husband. Maybe thats why he is making such an intense impression.... 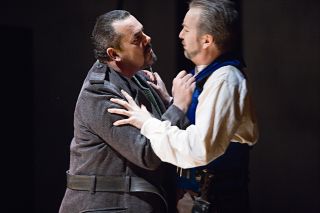 .....a very impressive achievement with lots of musicality by Jens Krogsgaard.....

The voice of Jens Krogsgaard have now gained a such power and dark timbre which enables him to deliver the part with a fine musicality......the two women (Elisabeth Meyer-Topsøe and Elsebeth Dreisig) and Jens Krogsgaard delivers some beatiful ensembles....

....In this tableau the competent singers have to act. And they do verywell..........Jens Krogsgaard sing a very good Max, there is power in his voice..... 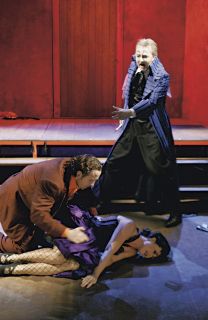 ......Jens Krogsgaard has developed a very complete tenor, and a strong authorouthy on stage..... 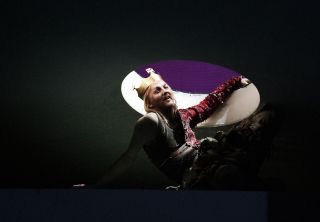 The masterly exploration by Jens Krogsgaard into the many aspect of this character lends itself gloriously to a long line of golden moments at the stage of The Royal Opera.

....the greatest surprise of the night: Jens Krogsgaard as the servant Caliban! a genial cast. And yet so plain ugly, that his name should be spelled with a T. Just the sight of him singing his big aria from the top of the book..... At the opening night this freak was at the same hight as the Queen sitting in her balcony. What a sight.

..........Oh brave new world! The world is old in the sea of Adés, and Caliban, just like the Gods of Wagner, belongs to a dying race. The animal like creature is surprisingly sung by a tenor, the incredibly secure Jens Krogsgaard, who closes the show with a touching aria.

...and here the big and nice surprise was Jens Krogsgaard.......his formerly quite lyrical tenor has developed a joyous beautiful and tight dramatic glow throughout his range, and he manoeuvres the somewhat heavier boat without trouble in a sound musical manner and with a beautiful legato.............he is acting the part free and naturely, and of course it is not a bad thing that he is tall and well proportioned. 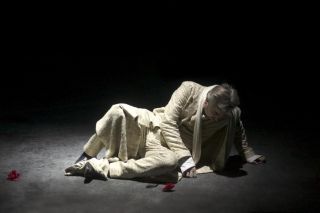 .......Jens Krogsgaard dominates the stage. Everything seems to succeed for him: The voice has, if possible, become more beautiful, and the acting is frighteningly strong. He can stand still and yet smoulder, and then with a single gesture let flickering flames run in every direction. His talent is the justification of the whole production…… 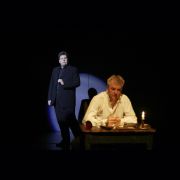 LiedTeatre - The Poet and the Death - Danish National Opera

.......Starting with "Im Wunderschönen Monet Mai" Jens Krogsgaard succeeds to give the 16 songs a poetic and beautifully nuanced emotional expression. His interpretation is very intimately and rich in nuances both vocally and in dramatic gestures. The Poets struggle with his love life comes alive on the stage without diminishing the spirit of the songs.

.........Jens Krogsgaard delivers some beautiful and intense moments on his way. Both the quiet lyrical and the sad mourning moments are working very well....... 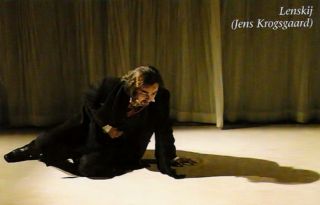 ……… rarely have you seen the jealousy of Lenskij develop so logical and inevitably. Jens Krogsgaard, still better and better, gave Lenskijs aria before the duel, which means his death, excellent formed in sound and expression…… 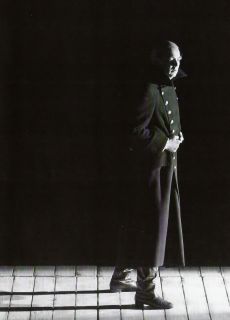 Top of the Bill

.....Captain Vere found an excellent interpreter in Jens Korgsgaard, making his debut at the Royal Opera and delighting the audience with his clarity throughout the register and careful diction. Krogsgaard was also utterly believable as the frail human being caught in an overwhelming moral and emotional dilemma, and he made this inner struggle seem real and relevant....

This was the first Danish production of Billy Budd and - like it's protagonist - it delivered a knock-out blow.........

.......The English singing of this almost wholly Danish cast was quite remarkable (oh, for this level of clarity in St. Martin's Lane) and none more son than Jens Krogsgaard, whose Captain Vere made evéry line tell........

.......at his debut at The Royal Theatre Jens Krogsgaard is making an incredibly fascinating portrayal of the tormented Captain Vere. Through the concentrated radiation of personal authority there is a glow from an inner anxiety, which is held down from moment to moment by a relentless self-discipline.

.....Krogsgaard shows us a frighteningly credible portrait of a split man, who cannot escape his personal Hell. A fullblown achievement, supported by first rate singing. At the curtaincall he was rewarded withs shouts of joy from the audience-